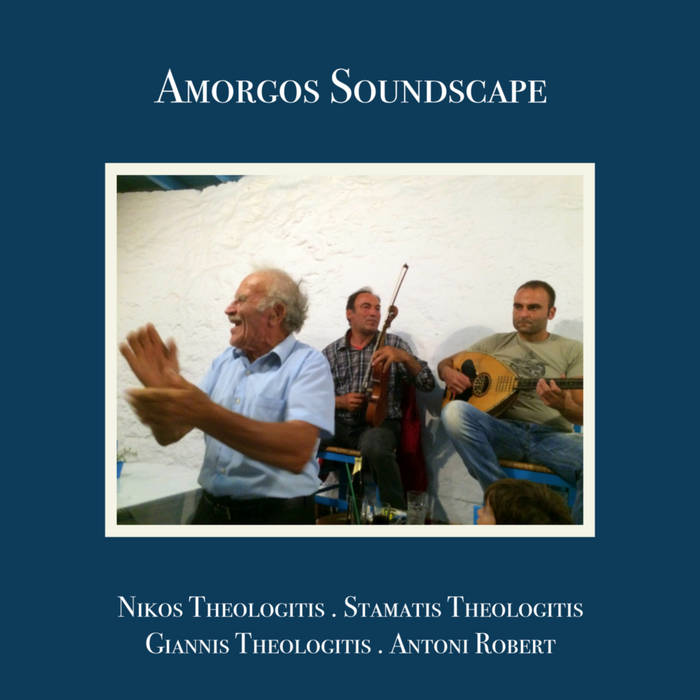 The notion of folk culture has definitely been transformed through the course of the centuries. More particularly, tradition and its authenticity and spontaneity in the context of orality seem somehow to have been mutilated and reconstructed, as soon as globalization and multiculturalism became one of the dominant discourses during the 21st century. Folk songs haven’t been an exclusion in this particular case, as revivalism and folklorism have emerged as a devastating force in the production of folk music. In “Amorgos Soundscape” by Antoni Robert, a paradox occurs: One could say that these folk songs are seen through the eyes of a foreign visitor and the recording could be seen as an exotic sound diary of a trip on a Greek Island. On the other hand, Antoni Robert’s recordings of the Theologitis’ family of musicians reveal an impressive approach on the concept of orality and its proud survival in the Greek folk culture.

“This is my fourth soundscape, but it is of a totally different nature with respect to the previous ones. Initially, I just wanted to proceed in a similar way that I did for the St Petersburg one, but once on the island, I realized that this idea was not adequate. St Petersbourg is a noisy place, while Amorgos it is not. Generally speaking, the island soundtrack is the wind and the sea. And at once the title “Wind on Water” came to my mind, but unfortunately, that title was already used by Fripp & Eno. But it was adequate indeed. I had the chance to listen to some goats also; the island is the hometown for a huge quantity of goats. So I was wondering about those simple things when it happened. It was dinner time, and we went to the small town of Tholaria looking for a taverna, and we found the Panorama Tavern. We started dining and at a given moment the musicians appeared and started to play great music from the islands. I recorded two complete sets, in two unforgettable nights. More than four hours of live performance. And I was said they do it every night. Once at home, while listening to that music I understood that it would have been inadequate to edit bits of it in order to build something more personal. The main feeling was a deep respect for the work of those musicians, and so the best thing to do was to choose two or three songs and use them as they were performed, in spite of the recording problems and the noise of the taverna clients. The only things I’ve added are the intro and the links between songs because wind and sea had to be there anyway. The results are a real soundscape of a dinner at Panorama Tavern, with the music played by three real artists. Stamatis Theologitis plays the violin and sings, Giannis Theologitis plays Laouto and sings, and the great Nikos Theologitis, 90 years old at the moment of the recording, and the owner of the tavern sings, claps hands, dances and explains jokes whenever he wants. I don’t know if I will reach that age. Probably not. But if I ever I’m 90 years old I want to be like Nikos. A happy man full of energy and passion. So this soundscape is a respectful tribute to The Theologitis Trio. It is their record. The rock band is The Cave Children, from Athens, included because our stay there coincided with a 4 days rock festival, and it was a part of the soundtrack too.”
credits
released July 30, 2017

Daniel Robert Lahey – Not Sure This Goes With Your Outfit