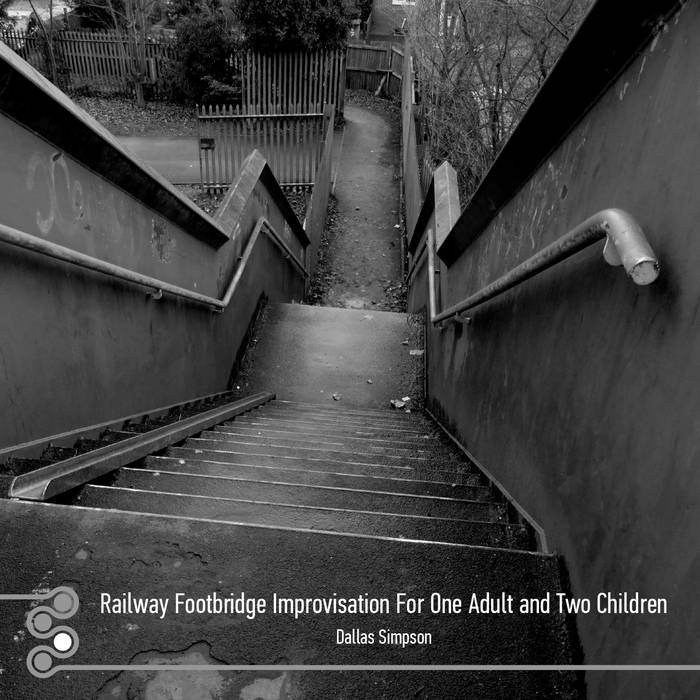 “Railway Footbridge Improvisation For One Adult and Two Children”

This work was created as a result of both joining a local walking group, the Netherfield Strollers and inspiration from an environmental improvisation workshop that was conducted at Hull University earlier this year as part of their Sound + Environment 2017 conference.

A walk with the Strollers earlier in the year introduced me to Carol and her two grandchildren, Eben (10) and Finlay (7). During our walk we crossed over a railway footbridge and then followed a footpath where I introduced the children to some simple sound making using a found stick and the railway boundary metal fence, then blowing ‘cawing’ sounds using our thumbs and a blade of grass. They loved it. And so the seeds of a freeform intuitive environmental improvisation were sown using both a prepared environment and found sound objects in the manner of the Hull Workshop at the location of the railway footbridge we discovered on the walk. This would feature Eben, Finlay and myself as freeform performers / improvisers.

As preparation for the performance I visited some of the houses adjacent to the footbridge to warn them of our activities at night just in case they may be disturbed by our soundings. The response varied from mild hostility, to curiosity, to support and even one couple asking if they could join in! I replied that they were most welcome.

Having obtained permissions from their mother Nicola, we gathered on the 9th December 2017 first at my house for a bit of instruction in making sounds with the objects I was preparing the location with (Aluminium Searchlight Mirror, 4 inch Fired Brass Gun Shell, Bull Roarer, various Plastic Pipes of different widths and lengths, Gong Beater, Long Thin Spring and a few other sundry items.) Following this brief instruction we went to the location in the dark at about 7:30pm and after placing the sound objects to prepare the location, we had a few moments silence, then made a short walk in to the start of our improvisation.

The performance consisted of two Movements:

I was struck by the zeal and enthusiasm of the two children. They followed my example and were soon experimenting and making their own sonic discoveries. Found sound objects included the structural metalwork of the bridge itself, the metal fencing and lamp posts. Other found items included various pieces of discarded litter, drinks cans, plastic bags, drinking straws, sticks, branches, leaves and stones.

The only additional instructions given were that during the Outward (Practise) we could speak if we wished, but not to speak on the Return (Performance) movement. Quite spontaneously they incorporated the ‘thumb cawing’ sounds into the Second Return (Performance) Movement and made many exciting sonic discoveries such as the ‘frog sounds’. A few passers-by were briefly present while crossing the footbridge.

All spatial choreography was created intuitively during the recording by dallas simpson.

Sincere thanks to Eben and Finlay for their inspiring participation, and to Carol and Nicola for their approval, plus supporting and helping during the preparation and performance.
Dallas Simpson, December, 2017.