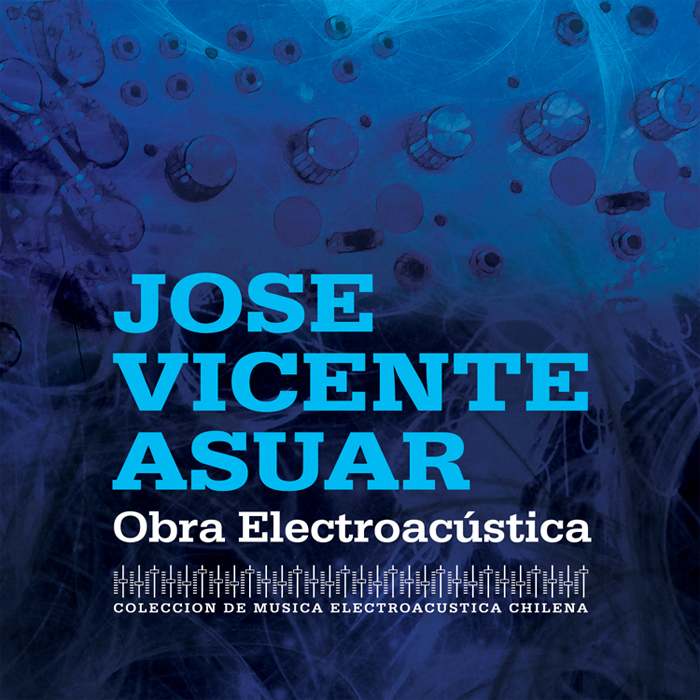 We are proud, pleased and glad to present, at last, this CD release of the electroacoustic work by José Vicente Asuar.

This is a carefully crafted compilation, both a record and a symbol of a unique oeuvre coming from Chile – an aim thoroughly pursued by Comunidad Electroacústica de Chile, Pueblo Nuevo Netlabel, and Escuela de Música de la Universidad Arcis (via Laboratorio de Informática Musical) in this new joint venture.

The strange and anomalous presence of this visionary in our Arts history, fully acknowledged as a creative music pioneer both in Chile and abroad, has generated a slowly growing interest in several realms of our local culture. In order to understand this fully, checking local and foreign literature on Asuar’s releases, prizes and commissions -proof of recognition and value of his work- suffices. During the 90’s, his presence fades, as he turns away from composition, to be rescued and rediscovered by the early 2000s. Harmonic mixture of composer and engineer, Mr. Asuar researched and generated electronic sound technologies, creating with them a deeply expressive and personal music: maybe the first devices created and modified in Chile in the late 50’s; the first fully synthesized work composed in our country and/or Latin America, in 1959; the implementation of Sound Technology career at Universidad de Chile, in 1969; setting up electroacoustic music studios in Germany (1960) and Venezuela (1966), are all consequences of his pursuit, as well as the composition of works that explored sound/ music continuities and discontinuities, ranging from natural to human to synthetic materials; designing a music-making-oriented computer of his own, unique in the world at that time (1978), all landmarks of a paradigmatic local pioneer. His work presents the convergence of certain aspects of musique concrète, linked to an Art Music context, where serialism techniques, computer-assisted composition via heuristic processes, and an exquisite flair for sound synthesis, flow in a particularly free and personal way.

Nowadays, his technical and artistic work is both a direct and indirect catalyst for musicians and artists from all disciplines and generations. In more than one realm he is recognized as an influence: in his electroacoustic music, his pioneer, multidisciplinary approach to computer music; his albums, devoted to teaching and uncovering the potential possibilities of electronic music; his aesthetic-technical writings on electroacoustic music. Even factors superficially addressed by popular culture, such as the longtime mystery concerning his whereabouts, or the retro aesthetic of a couple of his LPs.

History presents Asuar as an precedent, but I would point him out also as a present-day ‘cedent’ (if it’s possible to put it that way), for he’s still signalling, gravitating, and pushing a way of understanding, creating, but, most of all, dreaming. He represents not only the blending of the musician and the engineer, but also the committed scholar and the supportive maestro, who wants technology to put the wonder of Music onto our hands…

All those features, so commonplace nowadays, were dreamt years ago by José Vicente Asuar.