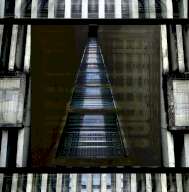 About beneath and above the surface of this album :
Oddschool is the third album of rADio eNd with for members the same trio*. While Hum Antenna was more about psychedelic explosion, Underground Culture was… well, about the Underground Culture, OddSchool is focus perhaps more on the reality study. And maybe the way we can communicate through music. We could have stayed more in the comfort zone with a mostly instrumental music, but since the very beginning, rADio eNd is thought like a kind of sonar. That’s why OddSchool needed to be haunted by lyrics as well as by any kind of crypto mantras, to show how, each can unlock these mantras to get a personalized message, as I did.
Also, despite I far enjoy not straight political stuff, mostly because the way this music is created is far more political than any talk, and that Dead or Alive ! could have been more universal and timeless, only with the mantra about the reversing of the symbols. I will not do a list of how the world is in huge trouble these days, but the decision to overturn Roe v. Wade law in the United States is too much dramatic for so many women, to keep my mouth shut down.
It can be interesting also to notice, that despite I do not voluntary transposed them in this song, many ideas were already in the word I added to underground culture presentation, to understand the whole creation process.
About Ok with everything… the meaning is first at the edge of two interpretations, in the industrial music style. It needs to decipher it by yourself as you can do with a koan, then only, the mantra deliver its message. This could talk, as well about acceptation, as a way to upgrade oneself, as I experienced it in my own life, acceptation (not resignation), to be able to really integrate something. As well, about fake acceptation, the same way that the kind of stuff like being friend with everyone indeed lead to be friend with no one, avoiding conflict can, that way, make you stand up for wicked things, at the opposite to any values which could motivate to do this.
Next I added the lyrics about Karpman triangle, perhaps because to remove these roles is a fine way to solve this mantra. More generally, like if you learn to remove your own storytelling,
you’ll be able to remove the propaganda storytelling.
Last but not least, there is an educational dimension in the whole album. When I was younger I’ve been studying, a short time, in the “lycée expérimental de Saint-Nazaire”. A school based on active pedagogies. Where students are equal in right with the educative team members. Where everyone does as well administrative tasks, cleaning, cooking, etc. students choice what they want to study and vote for the establishment choices.
There are other ways to learn if we want another world. In france in ordinary colleges, things are very slowly changing, but what is the meaning to form the teachers to the caring without to let them do the criticism of the system ? While the whole society is build on violence, competition, exclusion, and so on. Also, if certain are still thinking like being superior because of their knowledge to the student. And often haven’t got experience outside of scholar system as human being. Or also the way sometime teachers can disgust students by showing art through the academic critic’s point of view, for example avoiding anything really subversive as well in the shape than in the essence.
Or still severing everything instead to show how linked all domains, learn to transpose, can help you to build yourself and live by yourself.
So many things to say about this kind of things, that I prefer to do not develop this more. An anecdote about the artwork, to complete the way things are linked, I made it with a glass photography of a school in ruin.
D-I-Y studies shall be a lifetime task, to experiment with art for example is a fine tool to learn, creations are meaningful fruits to help you to grow up.

* There is another album without Studio 112 here peter-hopes-explodingmind.bandcamp.com/album/purple-circle-the-french-dissection

rADio eNd is a process more than a simple musical project…
More informations about rADio eNd on the official page
horsnorme.org/rADio_eNd/rADio_eNd_english.html

Special thanks to anyone, skeptical, non-dogmatic, learning the whole life length.

Dedicated to all the education underground pioneers, like Francisco Ferrer, helping their fellows to build their own system.