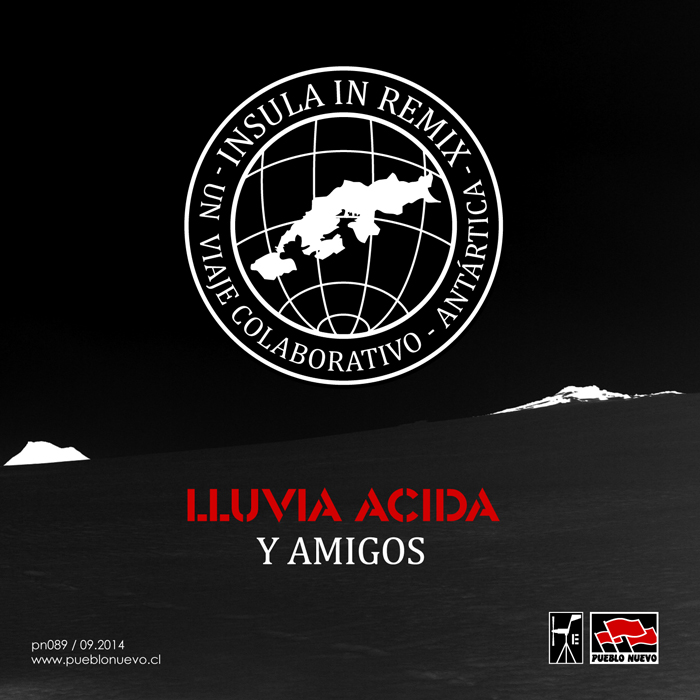 (Island of while
surrounded by sea ice.
Hostile, at the end of the world.

Southern earth, unknown land.
Wind in favor.
We pray to the sea to return us home).

With these words pronounced in Latin(1) by our friend and colleague Frank Benkho “Insula in Remix” begins, a collection of remixes and versions of the pieces that gave form to our disc “Insula in albis” (Pueblo Nuevo/Eolo, 2013). In a way, it is the final link of a work that started nearly two years ago, when we traveled with the support of the Chilean Antarctic Institute (INACH) to a secluded place located on the borders of civilization: King George Island (South Shetlands, Antarctica). There we collected images and sounds, both natural and human in origin, in an environment in which the majestic landscapes contrast with the technology used to resist the onslaught of the elements. We met people of different nations and cultures, sharing together in this environment of water, stone, ice, and rusted metal.

We presented “Insula in albis” in the Teatro Municipal “José Bohr” in Punta Arenas in the Celebration of 50 years of the Chilean Antarctic Institute. At the beginning of 2014 we managed to return to King George Island and we presented the work before the personnel of the “Eduardo Frei” base, in what was our second recital in Antarctica. After having shown it in Buenos Aires and Santiago, we decided to invite other musicians to reinterpret our discoveries, to make them their own and give them new forms in their own style. We appreciate the time and effort each one invested in realizing their contributions. We hope that we manage to transmit once again to all those who follow our trajectory the excitement we feel when we put our feet on this island, where people live together in a way that the rest of the world should imitate. “Insula in Remix” is available here, to help you set forth on a sonic flight towards the Continent of Light.

(1) All Latin provided to us by online translation applications.