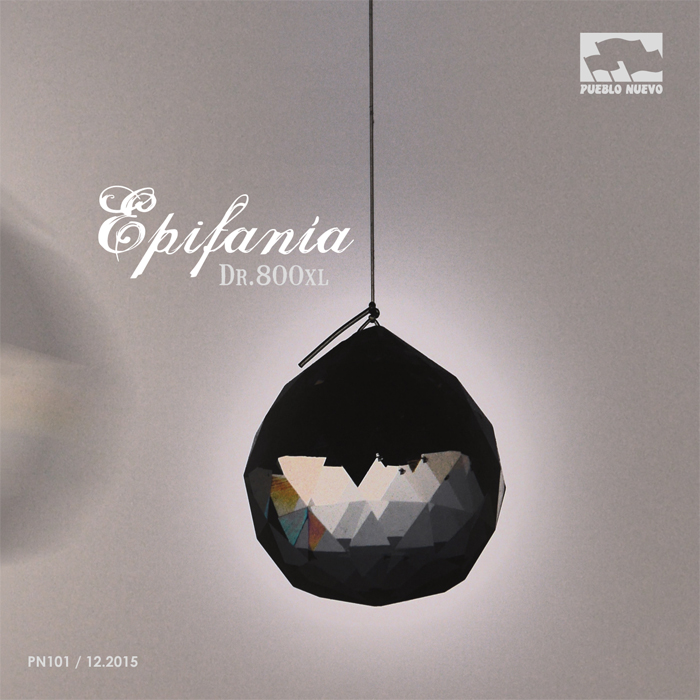 “Epifanía (Epiphany) (From the Latin epiphanīa: f. manifestation, appearance, or revelation). – This corresponds to the final album of the trilogy initiated in 2006 with ‘Anomia‘ (pn007), continued then with ‘Vesania‘ (pn047) in 2009; and, as such, it continues the course and the dynamic of these 3 states (the diffuse confusion in the beginning, the unbridled madness of the mature conflict, and then, the illumination and calm of the resolution), trying to give an account of various biographical and creative states of the author. ‘Epifanía‘ establishes itself, at the same time, as a point of inflection with profound changes to the stylistic and discursive in this delightfully haphazard route that is life and its creatures-creations.”

“‘Epifanía‘ (Epiphany), completes the trilogy of Dr.800XL for Pueblo Nuevo… an exercise in electronica of high flight, fresh and full of spatiality. Reunification of samples in a Down-tempo beat, with techno tinges and with a palette of spatial/temporal synthesis of ambient tone. In this multiverse of intricate breaks, playful glitches, with contemplative tone and with a marked experimental accent, Felipe Zúñiga Herranz drives the pulleys to give us a work that makes its impression on the listening, through the richness and variety of the compositions. A disc that crowns in an exiting way this musical/discursive continuity… in good time Doc.”

“The Sound as a tool of echolocation for tracing emotional and mental maps. The Beats like serial lightning strikes forming thoughts. The Sequences forming successive images that vanish at the boundary between the Conscious and the Unconscious. Glitches like nervous tics that we strive to conceal. Arpeggios of Acoustic Guitar that evoke moments that will not return. Synths that move around like cirrus in the sky that our eyes can span. Reverbs that bounce off the walls of our internal cavern. This is how I can describe this “Epiphany” that Felipe Zuñiga gives us today. Fast, enlightening, but not ephemeral. If we listen carefully to them, his pieces take the form of portals, on whose threshold oscillate vibrations that evoke a wide palette of colors, playful and far from the claim of superiority of the Musician above the Listener. Thank you very much for this album, Felipe: I believe that you were happy creating it, and in these times, to share that is a significant and necessary gesture.”