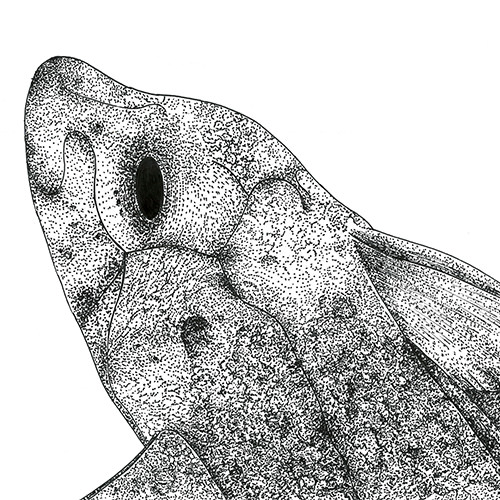 For its 35th release, Da ! Heard It Records plunges your head into a broth of funk ideas.

A shark fin floats in Wankers United’s polygon soup. Out from the depths, the creature imagined by Elise Kobisch-Miana that illustrates this new album seems to be attracted by the surface after a very long sleep. Truth be told, in this new production, both references and fresh ideas abound.
Great master of skweee in France through his label Mazout, Thomas Lanza has always had a taste for electronic kludges and syncopated rhythms, which were inherited from his hip hop background. After trying his hand at this style on a number of compilations, he released his first album on American label Ausland in 2017 and serves it again with Da ! Heard It Records with a series of pieces as the pièce de résistance.

In the kitchen, one finds with pleasure everything that gives his usual productions their charm, but prepared here with the desire to respect traditions. Immersed in a bath of acid and electro old school, the ingredients of this elaborate recipe will remind sensitive music lovers of the original flavors, somewhere between Cybotron and the beautiful hours of the Warp label. The result, beyond the skweee that he regularly cooks up, rather leans towards a playful IDM that was rid of the superfluous.

Developing the evolution of the sound arrangements with precision throughout the pieces, Thomas leaves no room for chance in his joyous blend, and he demonstrates that, over the course of more than fifteen years, he has acquired solid experience in the field. No stranger to Luke Vibert, whose influence is obvious here, he nevertheless spices up his melodies with a lovely oriental touch and yet shows, if more showing was needed, that life is good in Saint-Ouen.

Various – United As One