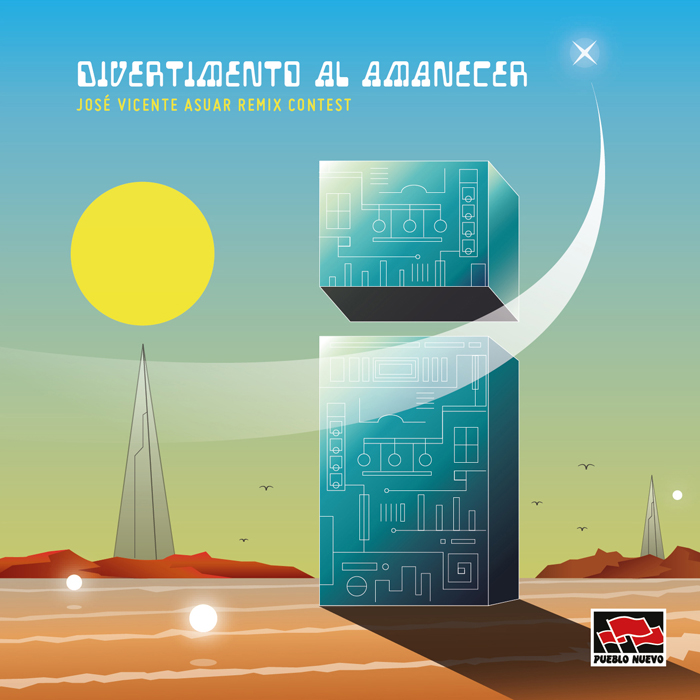 “Divertimento al Amanecer”
José Vicente Asuar RemixesElectronic music by José Vicente Asuar has influenced several generations of composers, both within the realm of electroacoustic music and other genres using technology as a means, ranging from techno to hip-hop, the latter at least in Chile. This has been proven, especially in recent years, with the growing rediscovery of his figure and work and his definitive positioning in the musical spectrum via academic writings and , especially, his complete electroacoustic oeuvre release (“Obra Electroacústica” / pncd08 / Pueblo Nuevo 2011) and Variaciones Espectrales documentary, by Carlos Lértora (2013).Therefore, and after several tributes due to Asuar’s death in January 2017, we wanted to carry out a new tribute, this time inviting the entire community to revisit the electronic body of work of the Chilean pioneer.

We have got together two perspectives, two schools: the electroacoustic one, which creates new pieces up from short sounds or sections from pieces by the honouree; the other one, in the vein of remix and sampling, also creates from the same sources, generating new works or tracks located in techno, ambient, hip-hop, and other related aesthetics.

In this deconstructive exercise, which we have called Divertimento al Amanecer, the pieces to work with were, precisely, Divertimento (1967) and Amanecer (1977).

The restriction was the use of one piece as an only source for a version, remix, etc., not merging both pieces into a single new one. Each author had to choose one or another work to participate, since the result of this call would be organized into a two-part compilation (sides A and B, corresponding to one of the two pieces each), participants were required to concentrate their efforts into on of the options.

Divertimento “is a piece with great dynamism and speed, full of very elaborated articulations which are constructing the musical discourse with its structural and spectro-morphological richness, that due to its great fluidity, organic liveliness and contrasts that could be said to have a certain baroque character. Something amazing at the same time are rough textures got by modulations and high-speed iterations, that somehow anticipate the birth of granular synthesis and could be related with some moments of works by later authors like Curtis Roads. This work would get the first prize of the Dartmouth Electronic Music International contest, USA, 1970” (Albornoz 2017).

On the other hand, Amanecer is a piece labeled by Asuar as impressionistic, “in the sense of trying to describe, by musical means, the sensations or impressions that the author has about some natural event. In this case it is about sleeping nature that little by little it begins to revive until arriving at a final dance full of life and energy” (Asuar 1989). From a certain point of view, we could say that it is a contemplative work, close to ambient.

Call for works was so successful we were forced to go through a long, steady listening task in order to get the final pace for this release; thus, it presents a wide collection of works inspired by, quoting and appropriating the sound materials straightforwardly, nourished by the expresive and adventurous spirit of José Vicente Asuar. We hope they interest, inspire, and and become sources of enjoyment for all.