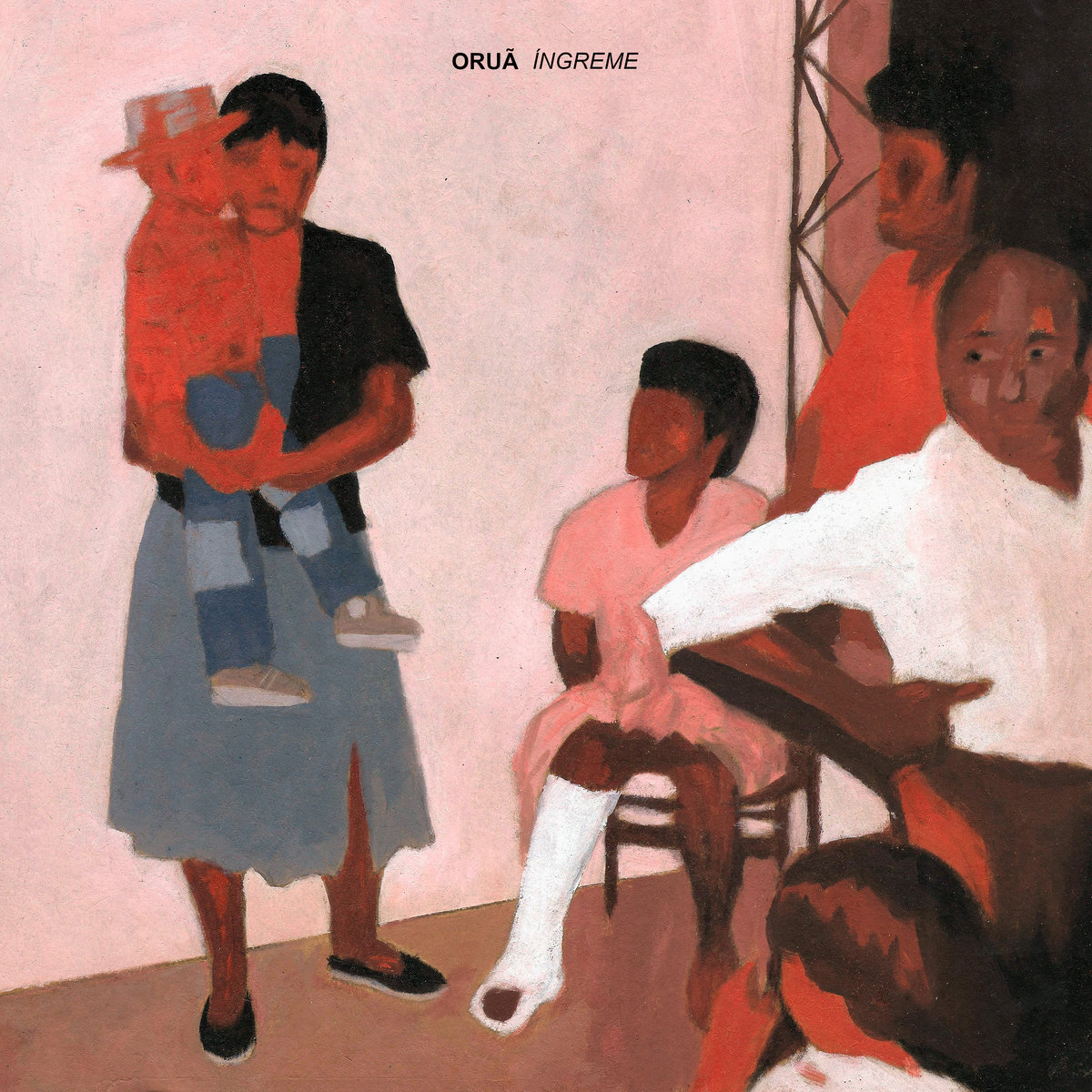 Oruã was born in downtown Rio de Janeiro in late 2016, around the corner from the parliamentary coup that ended for many people some belief in our democracy. Recordings on old cassette tapes made in the cramped Escritório in the middle of the city yielded two albums and an EP very representative of the atmosphere that hovered at the end of the last decade: “Sem Benção / Sem Credça” (2017), “Romã” (2019), and the EP “Tudo Posso” (2019) were all released in Brazil via Transfusão Noise Records and in the US via IFB Records.

In 2018, an election year and that of a national trucker drivers’ strike, Oruã crossed the country and crossed borders. Through a large number of cities, capitals and small towns, the band traveled outside of Rio de Janeiro more intensely, beyond the usual Rio-São Paulo axis. Taking the BR-101 they reached Natal, cut through Bahia, and then down to Uruguay, also traveling through the south of the country. During this trip by borrowed car, “Romã” was being conceived.

The following year, in 2019, Oruã toured the United States and Europe for the first time, opening for Built to Spill. Soon after, at the same time that Oruã opened for BTS, two thirds of the band from Rio, Lê Almeida and João Luiz, would return to the stage after their set to compose the Brazilian version of Built to Spill together with João Casaes (today, in 2021, Casaes is part of Oruã’s most recent formation).

Then, in mid 2019, with less than a year to go until the future worldwide decree of the pandemic, without even dreaming of the social isolation that would happen, Oruã embarks on their second international tour, the first in Europe, playing at venues like the O2 Forum in London and the Rockefeller Music Hall in Oslo, and then a second tour of the U.S. totaling approximately 70 shows until the middle of that year. In the second half of the year, Lê, João Luiz and J.C. followed the rest of Built to Spill’s tour through the USA playing only in the North American band until the end of the year.

In this period, drummer Phill Fernandes leaves Oruã. Karin Santa Rosa (who had already shot two great Oruã road tours: one to the Northeast and another to the South of Brazil) joined the band while Lê, Casaes and João Luiz were still on the road with Built to Spill. She, who didn’t actually play drums yet, spent some time practicing to compose the latest version of Oruã that would feature two drums, as in the beginning. After the end of the 2019 BTS tour, João Luiz also leaves Oruã and returns to Brazil. Lê and J.C. stay in Boise (USA) recording Built to Spill’s new album and, in parallel, start developing a new Oruã.

“I started recording this record in 2019, the year my life took a giant jolt. I was on a huge tour playing drums with Built to Spill, a band that I spent a good part of my life listening to a lot and in no kind of dream would I ever imagine myself being a part of.

In the middle of the tour with BTS I was putting together a lot of recordings, things that were giving us paths. From these tracks we were putting together the new line-up. Daniel Duarte, who had played on the first album, returned to the band, which had two drums again. Bigú Medine started playing the bass and J.C. took over the synths, mpc, and arrangements. The foundation for íngreme existed before we came to live in Búzios, but it was living in a calmer and greener region that the diamond was lapidated with care and dedication. This was the first record I mixed on a notebook. The previous ones were made on cassette tape.

The lyrics mostly verse, reflect and propose to think about some differences… social and racial. Some with visions of different perspectives of a better world, and others rougher, almost curses or prayers, in general to uplift morale.”

Like a photograph, Oruã’s recordings register, through sound and lyrics, the moment. As no other Brazilian musical group does nowadays, they transform into power, into a rich work of obstacles lived through. Also like a photograph, the sound recording has its thematic approach, not limited to what is framed, and says a lot about the perspective (vision and origin, at the same time) of the person who creates it. If you pay attention, it is all there.

The soundscape of the steep hike unfolds into other landscapes – greener, more percussive, and spiritual, as they discover for the first time a different lifestyle. Not a calmness, but a truly independent lifestyle. Free. Growing up in adversity, the child of a turbulent decade, Oruã has no fear. In 2021, after five years of activity, after traveling the most varied roads, the band does not forget what and how the journey was made while being grateful. It is, finally, time for the harvest.

Recorded and mixed by Lê Almeida and João Casaes